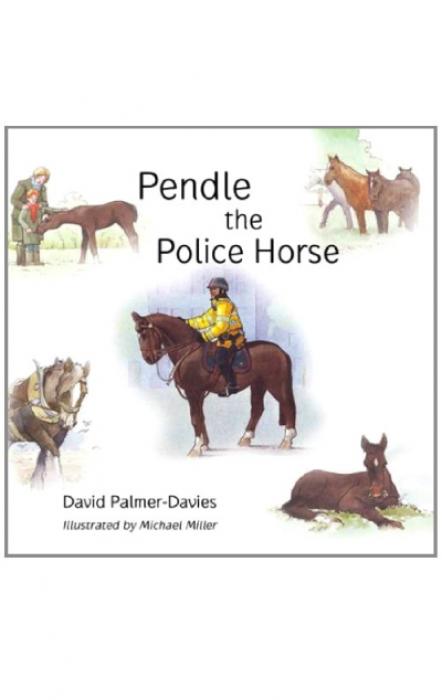 Pendle the Police Horse is a delightful story about a foal who spends his time daydreaming about what he should be when he grows up. He looks to his other horse friends for answers ; such as ‘Rocket’ the race horse, ‘James’ the hunting horse and ‘Fred’ who pulls a plough for a living. Fate lends a hand and the other horses all realize what Pendle should do before even he does and life as a Police horse beckons.

David was born in Blackburn, Lancashire where he went to Queen Elizabeth’s Grammar school.When he left school he spent some time in his mother’s homeland of New Zealand. It was here that he first gained an interest in horses. In 1989 he joined Lancashire Constabulary and eventually transferred from uniformed patrol duties to the Mounted Branch where he still works. David plays an active role in supporting the Retired Police Horse Benevolent Fund. “ Pendle the Police Horse” is David’s first book, inspired by his working life with horses and having three young boys of his own. David’s other interests are walking the fells and mountains of Cumbria and watching Rugby Union ( now he’s too old to play!) He lives in Leyland with his wife his boys and their horse.Pendle is a real live working Police Horse. He has been with Lancashire Constabulary Mounted Branch since 1998 and is 18yrs old. He is a 16’3 hands high bay gelding . Throughout his service he has worked at many major high profile events including premiership football, and All the Queens Horses in 2002. He continues to go out on patrol everyday throughout Lancashire and is considered as one of the most reliable and time served horses on the department. The Lancashire Constabulary Retired Police Horse Benevolent Fund was established in 2009 in response to the need for the Mounted Branch to take an active responsibility for the welfare of its retired horses. This is purely a c